In Georgia, like other states, odometer disclosure is a requirement for completing registration paperwork for vehicles less than 10 years old. It is an important step in the prevention of odometer fraud which is usually done in conjunction with other crimes like car theft and title washing.

The Georgia Department of Revenue has a free VIN lookup tool called VIN Status Check for checking the status of a vehicle’s registration and insurance:

This Georgia Department of Revenue system, listed as a top Motor Vehicle Division (MVD) online service, is intended exclusively for use by authorized users only. You may need to set up an account to access to the tool. 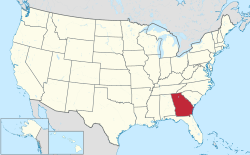 The State of Georgia, the 4th state to join the Union, is located in the Southeastern part of the United States. The country’s 8th most populous state (population of 10,310,371), Georgia has 59,425 square miles of area that consists of 59 counties. Georgia’s most populous cities are Atlanta (capital), Columbus, Savannah, Athens, and Sandy Springs.

Statistics on Accidents, Theft and Disasters

Why should I run a Georgia VIN Check?

Run a Georgia VIN Check to uncover the full-story of your next vehicle.